In recent days, Full Moon Features has finally released the official trailer for Attack of the 50 Foot Cam-Girl, the new movie directed by Jim Wynorski. We waited a few days to make comments about the trailer, trying to figure out what kind of product we are in front of. After viewing the footage, we asked ourselves: is this movie a Sci-Fi parody or a softcore parody of a Sci-Fi movie?

Currently, we have few elements to understand if this project is a softcore movie with all the characteristics of the genre. Jim Wynorski has confirmed, through some dialogues with his users on facebook, that Attack of the 50 foot Cam-Girl will have nude scenes inside and that it will be classified as Rated. The director also posted a photo of Ivy Smith, taken from the movie, with the main actress during a shower, nude. 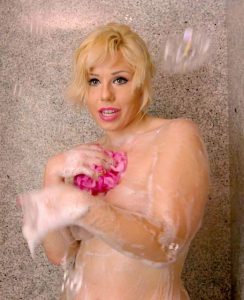 Obviously, the lack of nudity in the trailer is due to one main factor. Full Moon Features distributes its movies mainly on streaming, and only later on in DVD and for the home video market. They therefore need to spread the trailer on youtube and major social media, and this it’s a garantee for the marketing.
Years ago, when Retromedia was the main major for softcore productions, trailers were visible directly inside the DVD, because the home video market was the main channel for Fred Olen Ray and co.

Confirmation of softcore content will only be given to us by watching the movie upon its release. Some elements, as we underlined a few weeks ago, go in this direction: