We are proud and happy to present an exclusive interview with actress Sadie Katz. Active in the horror genre in recent years, Sadie has also starred in some softcore movies. In this interview, she told us about her prolific career and shared with us a beautiful and touching memory of Amber Rayne, who tragically passed away a few years ago.

Hi, Miss Katz. Do you mind introducing yourself to our readers and users?

Ohhh… I have the urge to say that I’m a doctor in human sexuality. But, I guess I’ll settle for I’m a writer, actress, producer and if you’re reading this you’ve probably seen my boobs.

Can you tell us how you started your career?

I’ve always been an actress. I don’t even remember a time when I didn’t want to act. I was really into theater and would practice signing my autograph over and over. Which strikes me as funny because if you see my autographed headshots now- my signature is umm… lacking. Honestly though I never really wanted to be famous- I just wanted to act. I moved to LA with my one year old son- which it blows my mind he’s 19 now. I didn’t know anyone in the business besides my acting teachers. There wasn’t a day I woke up and didn’t try to figure out how I was going to get in film. It took me ten years before I landed the lead in a film. It seems like forever ago. The upside of that is I try as hard as I can not to judge my career against anyone else’s. I feel very grateful I am getting to do what I love and worked so hard for. 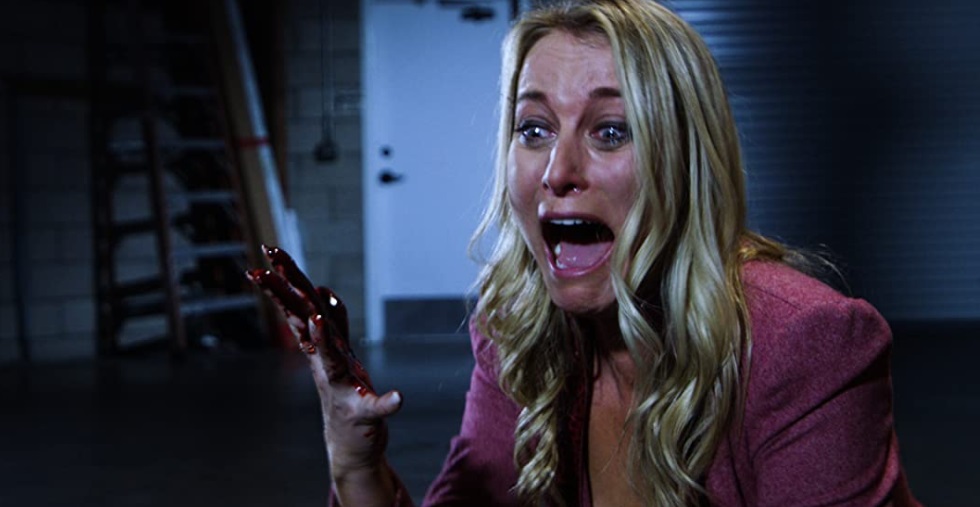 In the last years, your name is linked to many horror projects. According to imdb, you are currently involved in 8 horror movies. Can you share some details about some of these movies?

I just wrapped a film for Lionsgate directed by Thomas Churchill– a vampire horror love story. I have a zombie movie coming up and after that I’m playing the President. I’m currently in pre-production about a troubled woman being trapped which I co-wrote with director Anthony Leone (Hacksaw) and will star in and produce. We used to be able to spill our guts and take pictures on set etc…but studios have decided to have a media blackout until the release. Which is understandable but makes a stuffy interview. Ha.

Do you think the horror genre has more opportunities for an actress, or an actor?

Yes, definitely. Most actors get their first “break” in horror films. It’s kinda odd to me that in all the years in different acting schools we never once explored horror scripts/films. The whole thing of acting is about living in imagined circumstances and then pushing it to the extreme. The horror genre is such a fun challenge that honestly can be an intense ride. The really wonderful thing about the horror genre is the fans. Horror fans are very loyal (much like softcore fans) and they’re super supportive. It gives you a chance to keep getting cast. I also want to add – something most people don’t realize the horror genre has more leading roles written for women who a lot of times really kick ass. Yes, a lot of films have women also hunted and chopped up (ekk) or some other scenario but unlike non-genre films the women roles aren’t just talking about men.

In your career, you got a brief involvement in the softcore genre, with two movies and an episode of 7 Lives Exposed. Why you have choose to leave that genre? What do you think about softcore genre and the softcore movies?

I probably would have done more softcore films – I was offered to do a series of six films and was cast in a reality show for Playboy I ultimately turned down. The softcore or “Skinamax” films were really professional sets and honestly a lot of fun to do. The scripts are written like a silly soap opera and if you’ll notice there’s not a lot of cursing and the love scenes are actually quite sweet. The problem for me was which, I didn’t even consider that the simulated sex scenes would be edited and posted on Porn Hub. Also, my google would have picture after to picture of my nude scenes. Neither really bothered me- I was surprised but I was afraid of not being able to do anything but softcore. I’ve continued to do my fair share of nudity in other non-softcore films, so I’m not against it. I absolutely love the genre and would be super down to produce/direct or write a softcore series or film. I think it’s ridiculous they’re not being made when the popularity of “50 Shades of Grey” shows that their is clearly an audience for it. Also, the sexy romantic novels are at the top of best sellers every single month. I also find that most fans of the softcore I’ve done tend to be really sweet men.

You worked with Amber Rayne (on “Birthday Sex” movie), tragically died five years ago. Do you have some memories about her on set?

I’m very grateful you asked this question. Amber was actually a really good actress. I remember she had a crying scene and she took it really seriously and cried perfectly on cue. Amber was also kind, funny and really wonderful on set. I knew she was a pretty known adult film actress and talked with her about it on set. She loved what she did. She had no embarrassment and really managed her career. She seemed to me to be a pretty open person and I liked her a lot. After we shot together we continued texting each other and were both in New York at the same time and tried to do drinks- but both ended up missing each other. I followed her on twitter and she was wickedly funny. I’ll also share that I happened to see an adult film she did and it’s one of the few I’ve seen where there was no doubt she was really into it. The general public seems to really look down on adult film actors/actresses which I find really odd and unfair because very few people haven’t watched and enjoyed porn at sometime in their lives.

When I read she had passed away I knew that she was part of a group of other adult film actresses who were speaking out about inappropriate behavior and rape allegations against fellow adult film actor James Deen. Amber had also retired from doing adult films around the same time. Her death wasn’t ever specified if it was an accidental overdose or something else. Which I think if she was a porn actress it would have been investigated more. I wasn’t super close other than texting a handful of times and the time in New York trying to grab drinks and a couple of times in LA where our schedules never matched up. Hearing she died bothered me because she was so young and ambitious. The comments I read online were cruel and disgusting. I think I read that Stormy Daniels defended her and took care of her horses.

You are also a producer. How difficult is it to get to the making of a film, especially in a situation like the present one?

The making of the film if you work with the right people and have your shit together is the best part of filmmaking. The ridiculously hard part is getting financing for your project. It’s actually a lot of people who swear they love your project have no problem financing it and take up a lot of time only to disappear or back out when the actual financing is suppose to happen. Besides the set rules for Covid and of course having have precautions in place- the positive is because of covid most of the “meetings” now happen over Zoom. I love a lunch meeting like anyone else but I find the more lunch meetings you have the more full of shit people are. The times I’ve produced I really enjoyed the experience and want to continue.

What has been your favorite project and why?

I have to say Wrong Turn 6 because it was a turning point in my career also I worked very hard to get the role. I loved Sally Hilicker, I loved the thrill of shooting in Bulgaria and the budget was high so I was lucky to be on as one of the lead antagonists in a big budget feature. It was an absolute ball to film and I enjoyed every single minute. Even when I was freezing in the snow over night having a sex scene with a hundred people watching as blood dripped over me whilst umm..humping.
I have to also say I loved shooting the dark rom com Nipples & Palmtrees it was my first lead and I loved the shooting style of Dylan Reynolds. The lead Matt James has been one of my best friends ever since. 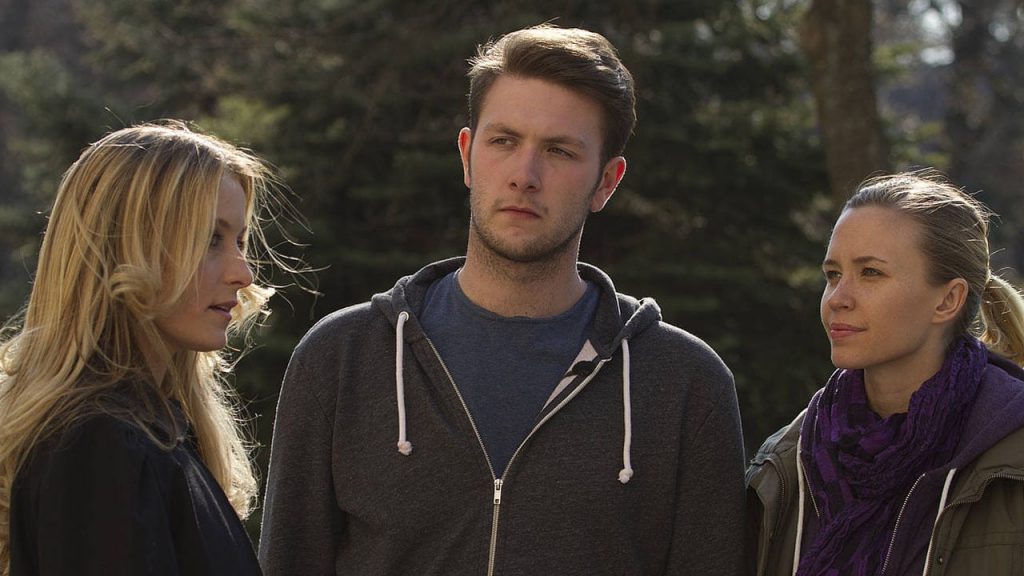 Can you tell us some funny anedoctes about your acting career?

Hmmm… that’s a good one. Everytime I do a film and I’m driving home- I tend to start beating myself up about what I could have done better . The conversation in my head kinda goes like this: Was I convincing that I really believed the killer robot was real and not just an actor in a robot suit? Did I cry too much? When the killer in the woods was chasing me did I fall in a sexy yet scared way? Did I nail the jokes while I was running terrified from clowns? This kinda loops in my brain until I realize that I have a very funny, strange job.
Also, I have to add I did an intense thriller with actor Randy Wayne– he’s very talented and also a good sport. The film was a revenge rape film and was very serious. My character ends up umm…sodomizing his with a strap on. We both were about to shoot- and we looked at each other, me with my fake strap on (which I wasn’t really wearing- but cheated for the shot), Randy in handcuffs. We were surrounded with a dozen candles in a cobbled stone house in the middle of Italy and we were like what the fuck are we doing?
I often have that thought running through the back of my head and then I remember, I’m doing what I love.